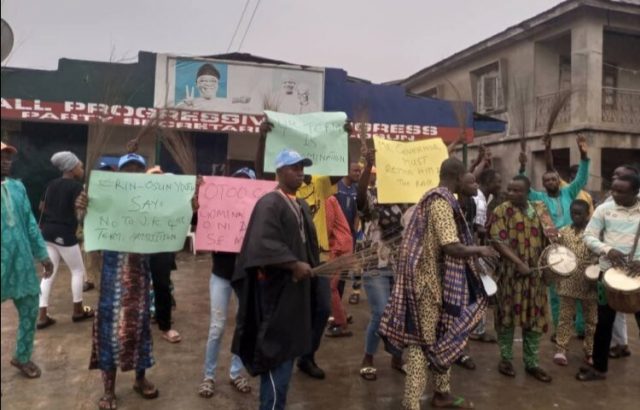 Some All Progressives Congress (APC) members in Irepodun South Local Council Development Area of Osun State, on Thursday, staged a protest against the candidacy of Kamalideen Oloyede, popularly known as Jay Kay, for the council’s chairman position in the upcoming local council polls.

The protesters, who marched peacefully to the palace of Elerin of Erin-Osun said they were opposed to Oloyede’s ambition to run the local council for the fourth time.

The protesters had earlier converged at the party secretariat located in front of AUD Primary School, Erin Osun before marching through the streets of the town to the palace of Oba Yusuf Omoloye.

They carried placards with various inscriptions such as “4th term is abomination”, Erin-Osun Youth Says No To JK 4th Term Ambition”, “Mr Governor Must Remove Him from the race” , among others.

The protesters alleged that Oloyede has been governing the LCDA since its creation about seven years ago, saying there arw many other members of the party who are also capable and qualified to lead the council.

They also claimed that the party leadership was planning to impose Oloyede on them for the fourth term, which they vowed to resist.

One of the leaders of the protest, Opeyemi Kamilu Yusuf said, ‘We are here today, because for a very long time we are being patient enough on so many issues. One of those issues is that, since the creation of the Irepodun South LCDA, only one Oloyede has been allowed to lead as the Chairman of the council.

“It’s a big deal when someone is in party and in the position of leadership and all you see is division within the party.”

Echoing a similar views Alhaja Ola, who hails from Ward 7 said there was the need for the change in the leadership position in the LCDA.

Another protester, Olanipekun Qodri urged the Governor to do the bid of majority of people.

“JayKay is our son, but what we are saying is that, we don’t want him to monopolize the position of the Chairman to him alone. He should allow another person to do it.

“We are also usin this opportunity to cry to the whole world and let Mr Governor and our party chairman Prince Gboyega Famodun be aware that this plot is on going and we will resist any attempt to manipulate or change result sheet of the day of the primary.”