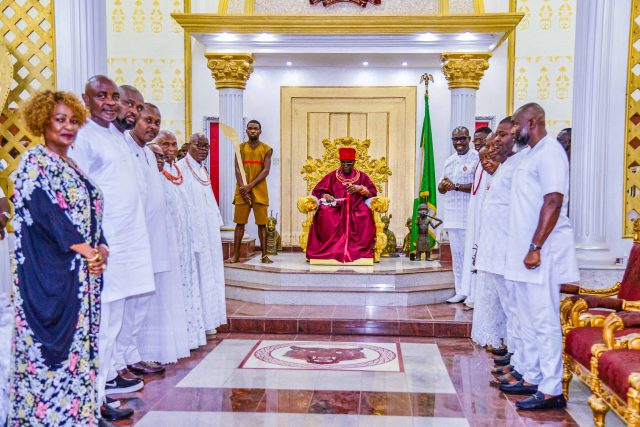 Receiving the visitors, the Oba of Benin commended Governor Obaseki for working with the traditional institution to ensure security and peace in the state and for supporting the development of the Benin Royal Museum.

The monarch said, “I want to thank the governor, his deputy, SSG, Commissioners, and other top government functionaries, as well as aspirants in the 2023 election for the visit.

“Present here today and uniquely together are the Esogban, Iyase and Osuma of Benin Kingdom. They are the most senior chiefs in my palace and also members of the royal family. This is to support the governor.”

“There is no society in the world that is perfect and I have told the chiefs to be praying for the governor just as we pray for ourselves and welcome the political aspirants in the 2023 general election. I pray we all do our jobs very well.”

The Oba of Benin further charged, “We appeal to you, Your Excellency to keep up with the good work you are doing in maintaining the peace and unity in the state, and as traditional institution, we will do our best supporting in ensuring peace in the state; you will see and not see some of our efforts. We will use all our resources to ensure peace reigns in the Kingdom and ensure the people are happy because happiness is key.

“We will keep supporting the state government in ensuring peace.”

On his part, Governor Obaseki hailed the monarch for supporting the government’s efforts at ensuring peace and security in the state, noting, “The last few years have been difficult but despite the challenges and difficulties, the Kingdom is doing well. There is peace in the land. With your support and the support of the traditional institution, we have been able to secure peace in Edo State.

“Security report as of today shows that we are doing well as we have not recorded any major crime in the state as we celebrate Igue. The success recorded in securing our people is due to the advantages we have in the development of our traditional institution in the last centuries, falling back to the traditional security arrangement, which has enabled us integrate the element of traditional security apparatus and that of the state, leading to the success recorded in securing the people of the state.”

Reassuring the government’s commitment to ensuring safety and security across all Edo communities, the governor further reiterated that the Anti-grazing Bill has been signed into law and is fully functional in the state.

He said, “Security and peace which we currently enjoy has made Edo a destination for investment as hotels in the cities are fully booked and people coming into this state to do business. This is due to the support we continue to enjoy from Edo people, and our decision has continued to pay off for us to have peace and unity in the land.

“There are challenges in Nigeria and there will continue to be challenges. Our role as a government is to reduce the challenges for our people and create hope of a better future for them.”

Hailing the monarch for attending the 2022 Alaghodaro Summit, Obaseki added, “Your presence in the summit was unique and it sent a positive message globally about the support the traditional institution has given to the developmental efforts of our government.” 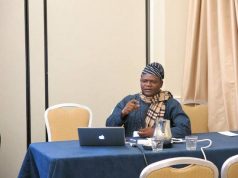 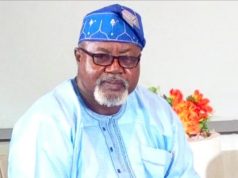 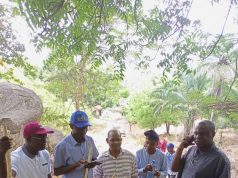